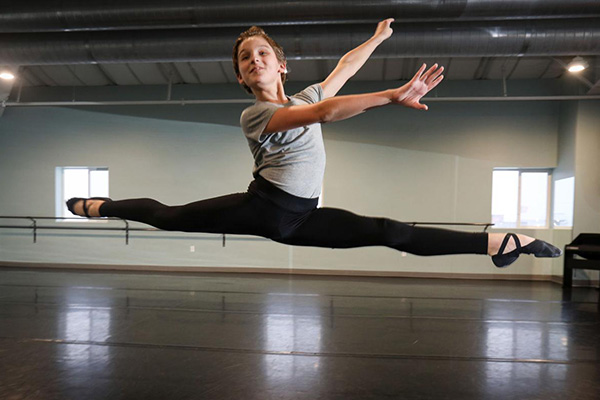 When he was 5 years old, Alex Westerman saw a holiday favorite, “The Nutcracker” ballet, on television.

“That” was ballet, and Alex, now an 11-year-old sixth-grader at Kellogg Middle School, is on a path that he hopes might someday lead to a professional career as a ballet dancer.

Although, he added, “For right now, I don’t really know yet. I’m a little young.”

He might be young, but Alex is an experienced dancer. He dances at three Rochester studios, has had major roles in local productions, and last summer attended the Minnesota Dance Theater’s summer program as a scholarship recipient. He’s now preparing for the Youth America Grand Prix competition coming up in Chicago.

It’s a full plate of ballet for a kid who once wondered “What is that?”

Carrie Westerman, Alex’s mom, said it was noticeable from an early age that Alex had movement and music within him.

“We would see him dancing to music with his own beautiful interpretive moves, and it was evident he was expressing his emotions,” she said.

Alex was originally enrolled in gymnastics, but he really wanted to dance. “He started with one class a week,” Carrie said. “We didn’t know how long his interest would last.”

Alex, though, was soon hooked.

“I express my feelings through dance,” he said. “I like the feeling of doing something the right way.”

He didn’t let initial ribbing from schoolmates deter him. Instead, he invited them to watch him dance in a local production.

“All of a sudden, they started telling Alex it was really cool,” Carrie said.

“There’s always some of the stigma,” about boys in ballet, said Katie Cook, one of Alex’s dance instructors. “But right now, we have so many boys at the studio. Something is changing.”

For a male dancer of Alex’s talent, she said, “Many doors will open for him.”

That might include residency with a major company, enrollment in a college dance program, and eventually a professional career.

“We’re not going to push him,” Carrie Westerman said. Alex has expressed interest in taking piano lessons and joining a choir, she said. The idea is to allow him to be a kid.

Then again, the looming competition in Chicago is not the kind of thing that comes along for every kid. He’ll dance to a selection from “Sleeping Beauty” and a contemporary piece.

To battle nerves, he’ll draw upon his performance experiences.

“Right before I go on stage, I get nervous,” Alex said. “I think, ‘Oh no, people are watching me.’ But once I’m on stage, I don’t remember there’s an audience.”

“He lights up when he’s on stage,” Alex’s mom said. “You can see that he loves this.”

To continue reading please click on the button below…